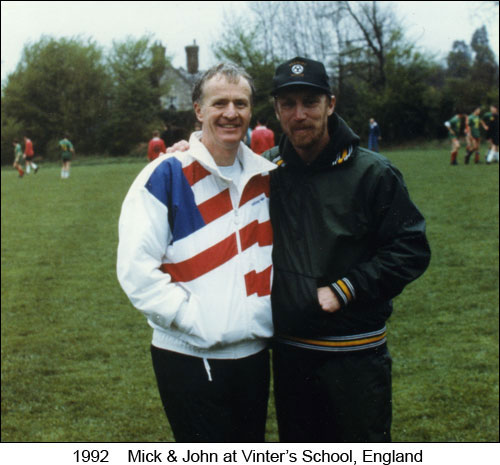 In the early 1980's, a team from Maidstone in Kent, England visited the Oneonta, NY area, and spent a weekend with Coach Werner and the Arlington Soccer Club.   The coaches, who stayed at Coach's house, said to just call them when Arlington was ready to come to England.   In the meantime, Coach started doing trips over April break with the ASC under 14 team known as the Arlington Lions.   Trips included Philadelphia in 1983, West Virginia in 1985 and Maryland in 1988.   In the summer of 1988, Coach decided it was time to try for the England trip.   Coach Werner contacted Andy Bryan, who had stayed at his house eight years earlier, to start the process.   Andy gave Coach the name of the Chairman of MPE Football Club, Mick Horrell.   From the first phone call from Werner to Mick, an unbelievable exchange began.

The two clubs shared a philosophy of "give the boys a game of football", meaning that there was a place in the respective clubs for anyone who wanted to be part of it.   The exchange has happened 14 times, with 7 trips in each direction, and over 200 boys have had the experience of visiting another country through the common bond of soccer.   The motto of the exchange has been "Friendship through Soccer".  Many families who hosted each other's boys have maintained their friendships with subsequent trips over the pond.

None of this would have happened if Mick had not responded "sure", when he received that phone call from Coach Werner.    Mick and Coach, along with their wives Val and Judy, became the very best of friends.   Sadly, Mick passed away in February, 2006, but his memory lives on as this exchange carries on.   Just as he gave so much of himself to help the boys enjoy their football, this exchange honors his commitment to making the world a better place, one person at a time.

Presently, another great man who gives so much of himself, Glen Amos, is in charge of the exchange for MPE.   Friendships continue to blossom, and having just hosted MPE this past May (see

pictures with thanks to Sharron Harrington), the Arlington Club is busy raising money for its trip to England in April of 2008.

Pics of 2008 Exchange (Big thanks for Photos by Sharron Harrington)